Since I review games, I’m constantly asked what my favorite games are. I have no favorite game overall, so it depends on the type. The following list may change on a whim. I try at least one new game every week, so next year I might have completely different favorites.

Favorite solitaire game?
My favorite solitaire wargame is Zulus On The Ramparts from Victory Point Games. It has some really fun card play and does a reasonable job of simulating either the real life battle or optionally the movie.

As far as solitaire non-wargames, I really like playing Terraforming Mars from Stronghold Games solo. It’s a Euro where there is an actual goal, terraforming a planet. You are in more of a hurry to terraform the planet when playing this solo, than multi-player. Hence, I prefer playing it solitaire.

Favorite micro game?
This is really difficult, because I really love microgames. My favorite from the Golden Era of microgaming is probably The Castle from Mayfair Games. It’s an old school dungeon delve that has very simple rules, but still has everything a dungeon delve needs. As far as modern microgames, I absolutely adore Khe Sanh ’68 from Decision Games. It’s a $14.95 simulation of the Battle of Khe Sanh where you try to protect Khe Sanh, clean out NVA entrenchments and clear route 9 while keeping as many of your own forces alive as possible.

Favorite board game that can be played by more than 2 players?
Time of Crisis by GMT Games plays great with 2 to 4 players. It’s a game where each player represents an important Roman family that is trying to use its influence to manipulate the military, Senate and populace to ensure their family name is remembered for all time.

Favorite Magazine Game?
Born of Titans from the Ares Magazine reboot is my favorite magazine game. The genre it takes place in is Homer’s Iliad. You play a hero who has to complete three quests before any of the other players. Some of the challenges you will face are monsters, fates, furies and your own hubris.

Favorite Zombie Game?
I really like All Things Zombie the board game from Lock ‘N Load. It’s a zombie game that uses wargame rules and the scenarios follow a storyline.

Favorite Sci-Fi game?
Intruder from Task Force Games is my favorite hex and chit science fiction game of all time. It’s heavily influenced by Alien the movie, but the “Intruder” can mutate into a more powerful alien or even divide into two aliens. As far as science fiction miniatures games, I really liked Warhammer 40K 5th Edition from Games Workshop. It is a very rich sci-fi universe that’s suitable for both casual gaming and tournament play.

Favorite Ancient’s Game?
That would have to go to house mutations of the old ancient’s miniatures rules such as Tactica and Warcry. Basically, house modifications of miniatures rulesets that were geared to having more than 1000 miniatures on a table. Though there have been some nice hex and chit ancients games, they just can’t compete with 25mm ancient’s games with over 1000 well painted figures on the table. My favorite ruleset was a heavily house-ruled version of Dave Pietrowsky’s War Cry. My Dad created a house ruleset that is for soloing ancient games with enormous amounts of miniatures that I like also.

Favorite Card Game?
Magic The Gathering. Period. No card game is better. It constantly evolves and keeps getting better all the time. There may never be a better card game.

Favorite Family Game?
Photosynthesis from Blue Orange Games. In this game, players attempt to grow trees from seedlings to fully grown in the richest soil. The sun changes position each round and trees gain light points for collecting the sun’s rays. However, trees cast shadows and can block other trees from getting any sunlight. Points can be used to purchase seeds, plant seeds or increase the size of trees. When a tree reaches its maximum size, it can be cashed in for victory points. The better the soil it grew in, the more victory points you will receive.

Favorite Role Playing Game?
D&D 2nd Edition and D&D 5th Edition are my favorites. 5th edition has the best mechanics in any role playing game, but the player characters are less overpowered in 2nd edition and this forces players to concentrate on working together rather than building characters that are jack-of-all-trades superheroes.

Favorite Dice Game?
My own dice game, but I haven’t polished it up enough yet to try and get it published. As far as already published ones, I really like Dungeon Roll. It’s a press your luck dice game where you roll up a dungeon delving party and fight monsters and collect treasure.

Bonus question: Favorite game designer?
My favorite game designer from the Golden Era is Neil Zimmerer. His games had simple rules, but were a ton of fun to play and well balanced. Joseph Miranda is my favorite modern game designer. He has designed a ton of games and I’ve liked most of the ones I’ve tried. Some of his games cover seldom-gamed periods and he also tries unique mechanics on occasion.

This one is only available on eBay:
Warcry (eBay) 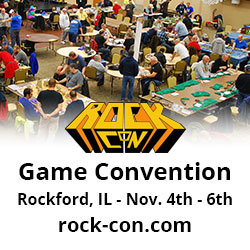