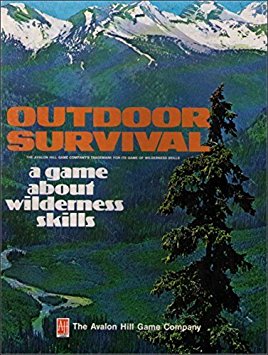 Outdoor Survival: A Eurogame before there were Eurogames

This game has always been an enigma. It is the bestselling game for The Avalon Hill Game Corporation (TAHGC), but it is also considered one of the worst products they had ever put out.

Jim Dunnigan got this assignment. His version was considered too complex. Others at AH would rework it, to simplify it. Let’s look at the finished product.

The cover is one of the best that TAHGC had ever put out. The cover is aesthetically pleasing and it perfectly illustrates what to expect in this game. The game comes with a 22”x 24” mounted map. They claim that it is “typical wilderness terrain.” Actually it looks like the place you would stage your Hunger Games. Most forests will not have a desert near a swamp. The map does not look like a topographical map that most hikers will use. It looks like the view you would get from an aircraft. Hence the mountains are not represented by elevation lines but are brown with some white peaks. The forests are green, the desert is yellow, and swamps have floating green plants. There is a river with fords and isolated lakes. There are silhouettes of deer’s printed on a number of hexes. These represent food sources. There are also a number of bases that look like cabins. These are sometimes used as starting points or destinations. An optional rule allows the cabin to be used as a water and food source. Woods and deserts cost two movement points, Mountains costs three, and swamps cost 4. It costs three movement points to cross and follow rivers, but one if you use a ford. Trails are present in woods, mountain and swamps. They cost one movement point to move on. 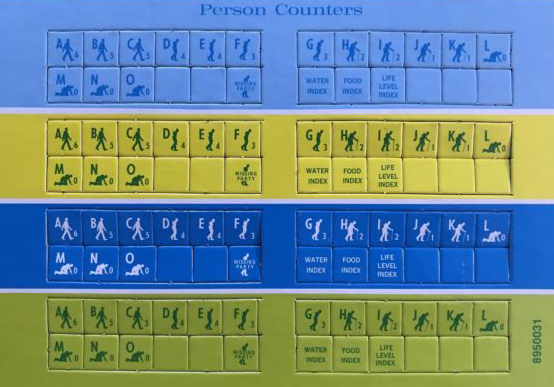 I am unsure of the scale. I think each turn is a day and each hex is five miles.

There is a double sided single page, which gives you the basic rules to quick start the game. The complete rules cover about eight small pages. This includes samples of play and additional rules. Also included is a 24 page primer about how to survive in the woods. It has a lot of useful information on how to survive in real life, but useless in playing this game. Each scenario has special rules. There are five scenarios: Lost, Survival, Search, Rescue, and Pursue.
A player is represented on the map with one counter. You are identified by color and a letter. If you are letter A, you have a silhouette of a confident man and six movement points. When you get to letter K, you need a cane to walk and have one movement point. Levels L through O you have zero movement points.

Each turn, a player rolls for directional ability. This is different in each scenario. This restricts your movement. Sometimes you are forced to use all your movement points to travel in the wrong direction. Then you move up to the limit of your movement. Then you check your Life Level index. If you did not replenish your food or water needs, you may lose life levels. How you do this depends on the scenario. If you do not find water the water index counter moves to the right. If you do not find food, the food index counter moves to the right. If you cross a gap to the next set of boxes, it will tell you how many life levels you lose. These counters can move to the left if you stay in hexes that have these resources and you may gain life levels.
There are optional rules for random events and another rule where all bases can be used as a water and food source.

There is a problem with this game realistically simulating wilderness travel. All junior woodchucks know that if you are lost, find a river or stream and go downstream. Eventually you will make contact with civilization. In this game it costs three movement points to follow a stream. This is the same cost as crossing it. This makes no sense. Following the river should be like following a trail and cost one movement point. It would help if the rivers were printed close to the edge of the hex that would show you if you are crossing or following the hex.
The directional ability is unrealistic. When someone is lost, they tend to wander around in circles or backtrack to their starting position. A lost person loses time. In this game you are sometimes required to travel in a straight line. You do not wait until the end of the day to determine if you have traveled 180 degrees in the wrong direction. I created a different direction ability chart. If you rolled badly, you lost movement points.

This is a game about wilderness skills. However I never learned or used any wilderness skills in this game. As a simulation to use as a tool for teaching or in the classroom, this game is a failure. The only thing you learn is that you die faster if you do not have water.

As a game, this isn’t too bad. You can quickly set up and play. In preparation for this review, I played this game six times in an hour and a half. Skip the Lost scenario at the beginning. That is the hardest. Play the Survival scenario. This is a race to get off the other end of the board. You will be playing this the most. Next are the Search and the Rescue scenarios. In these scenarios a missing person’s counter and six black counters are placed on the map. In Search, You have to move into the hex with the missing person; in Rescue, you find them and carry them off the map. In Pursue, one person is the escapee. To win, he has to get off the map. The pursuer wins by moving into the hex of the escapee. Lost is the hardest scenario. Your chances of dying are great and it has the most confusing rules. This is where this game has gotten the bad reputation. Since it is the first, everyone presumes that it is the easiest.

This game is more complex than a family game, but simpler than your average military board game, depends on skills, and has no human conflict. Does this sound familiar? It is a Euro game before there were Euro games!

This game begs for the more advanced game. You should be allowed to carry food and water; you should have to face problems with weather, ground conditions, and it should allow you to have pack animals or canoes. It could have used more maps. I have my own home rules on this subject.

There is a more advanced version of this game. It is called Dungeons and Dragons! In the original rules you were told to purchase Outdoor Survival as a map for wilderness travel. At the time Outdoor Survival had only been out for a few years. No doubt this helped to drive up the sales.