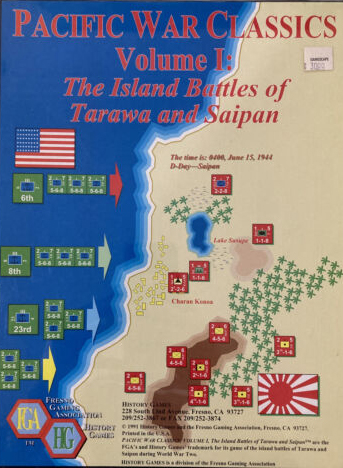 A Gamer Looks at the Fresno Wargaming Association by Len Krol

I was at my friendly gaming store when I saw something I never knew existed. It was issue #5 of the Wargamers journal by the Fresno Wargaming Association. I never knew they put out more than two issues. When I sent in my money for a subscription, it was returned to me. I presumed that they went out of business. A lot of wargaming businesses went under quickly in those days.

The Fresno Wargaming Association was started by Mike Crane and Terry Strum after they left GMT games. They were the M and the T in the title of GMT games. While at GMT they designed games such as Silver Bayonet, Operation Shoestring, and Air Bridge to Victory. These are games that I have played many times. FGA was noted for their superior art and graphics. It is only recently that I feel that the rest of the industry has caught up with them.

Issue #5 dealt with the with FGA controversy. For you young people that never heard of this, or you older people who have forgotten this. In Fire and Movement #78, FGA was accused plagiarizing, copyright violations and other foul deeds.

It seemed to all start when people at Game Designer’s Workshop (GDW) seem to feel that the Fresno people copied their Operation Crusader game. Talking to Richard Berg, they learned that FGA copied the complete order of battle for their Shiloh battle from him. Proof of this was that FGA copied the name of one of the Brigadier generals who was fictitious. Then like little tattle tales, GDW told others. First they told Clash of Arms games that FGA stole their ad copy for their battle of Leipzig game. They told TSR and Decision games that FGA were plagiarizing games they had the publishing rights to. Is there no end to the villainy of FGA? As an example of this, Fire & Movement magazine (#78) showed two maps, one from an SPI strategic game about the American Civil War and an FGA game about the American Civil War. The surprise is that the Mississippi River on both maps flows in the same direction! Imagine that!

FGA defended themselves. Game systems cannot be copywrited. Furthermore, they stated that their version of Operation Crusader is an improvement over the GDW game. If you had the GDW game, you would still get your money’s worth with the FGA version. Secondly all ad copy about a battle will sound about the same. You also cannot copyright the features on a map. An accurate map will have the river flowing the same way and cities in the right places. FGA also noted that no one is suing them.

This controversy seems so childish now. Maybe FGA rejected a game that Richard Berg proposed, so he vowed vengeance. Roger McGowan was the publisher of Fire & Movement magazine. He was also one of the top cover artists in the hobby at this time. Was he so jealous of the quality of FGA’s artwork that he felt that they had to be destroyed? What was GDW smoking that they were so worried about competition from FGA that they had to attack them?

This is not the first time Berg used a fictitious name in a game. In the Conquistador game he had a French explorer named “Persone.” This was for game balance. Otherwise the French would not have an explorer at during the early turns of the game. For the Shiloh, there was a Brigadier General whose name was unknown. Berg used the name of his psychiatrist. If he had acknowledged this, there would have been no problem.

I am not sure if this was happening before or after Berg had turned in his law license. Berg was a criminal lawyer. This is a world into itself. Criminal lawyers know less about copyrights than your average person. GDW should have consulted other lawyers for advice before making accusations.

I have played Pacific War Battles, Volume 1. This includes the battle of Tarawa and the battle of Saipan. I was excited because this was the first time I could fight these battles. This was a time when every second wargane was about panzers on the Steppes. I wanted to fight in the Pacific. Saipan was a replay of the system they used for Operation Watchtower. I had no problem playing the game. The other was about the battle of Tarawa. This was a two map game and I liked the maps. This was the debut of what they called the simple tactical system. It truly was. It showed how the island of Tarawa was taken with utmost savagery.

I also have Brother against Brother, Eagle and the Sun, And Defiant Holland. I have not played these because their value would decrease if the counters are punched out.

I am not sure what happed to Mike Crane and Terry Sturm. They might have suffered the fait of many wargame designers. That is they found a better paying job. Crane and Strum did seem to have an attitude, so maybe they were disliked by other game manufacturers. As a gamer you did not care about this. The games were all that mattered. The graphics were superior to what was published then. All game companies have problems with their rule sets at the beginning, but they learn. All businesses are fragile in their first year of existence. Problems that they could easily weather after a few years of existence can destroy a new business. I always felt that FGA was driven out of business. This deprived gamers of some good games. FGA had such potential.

If you are a publisher, you might want to think about republishing some FGA games. Even better, call Mike and Terry up and ask them if they have any new game ideas.
Meanwhile, I am looking at my pile of FGA games and wonder which to play next.