European War is a one or two man game played in a 24×18 inch play area using 3 fixed wing aircraft pieces, 3 rotary wing aircraft pieces, six soldier pieces that are painted grey or green. The game uses a system I developed with a space divided into the following compass bearings: North, Northeast, East, Southeast, South-Southeast etc. Interactions take place within one of these slices. Play is dependent upon a victory track running from -5 to +5 recording combat results.

Within the rule book is a similar more detailed map showing land and sea area, the lines defining slices marked with eight numbered cross hairs. In addition to the lines are geographic features defining land, sea, ports and airbases.

The game is played in sequence referring to the victory track.

The sequence of play is movement, autonomous warfare and combat. 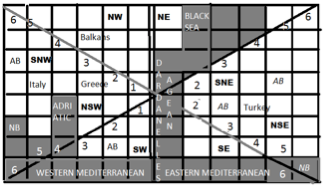 For the PC units the player moves a unit to an adjacent slice by referring to the lines separating slices and rolling a dice. The position on the line is the terrain or sea area the unit occupies. A ship miniature may move to an adjacent sea if on a corresponding sea area, likewise a land unit may move to an adjacent land area. Troops are moved by placing an off-play area piece in a slice in which there is a friendly aircraft and land. An assault landing craft may place a soldier unit where there is a sea and land area.

Movement is clockwise or counter-clockwise. The PC player has a choice, the NPC is tied to the victory track. No movement across the center circle.

Autonomous warfare refers to the position of spies, UAVs and terror groups. This is tied to the victory track giving the players a vague idea of how things stand.
The combat table requires no die roll, just a cross referencing of combat number adding in modifiers. This changes the combat number instantly.

I have test played this game and find it easy to play and of hidden unsuspected depth.

Wargame Chat 2023 Our video series where we discuss everything wargame related. Feel free to message us with questions you would like us to answer or topics you...[Read More]