DeathMaze is an old SPI microgame from 1979. This long-lost game is a D&D inspired dungeon delve that has all the basic features you would get in a modern dungeon delve board game. What is significant about DeathMaze is this game had these features nearly 40 years ago! Since this game was released, components have gotten better; there are more spells and monsters, but otherwise the basics of dungeon delving board games haven’t changed much. DeathMaze allows players to dungeon delve solo or with up to 5 other players.

The components in DeathMaze are super basic. There is a rulebook, counters and nothing else! This dungeon delve gets more done with less components than any other board game of this type I have seen.

The rulebook is 16-pages long and I found it reasonably well written, but it should have had a formal sequence of play section. After reading the rulebook, I wrote up a flow-chart as a sequence of play to reference while playing the game. Be advised that there are a lot of tables in the rulebook and you will constantly be flipping back and forth through the tables while playing the game. It would have been better if a separate table sheet were included with the game. 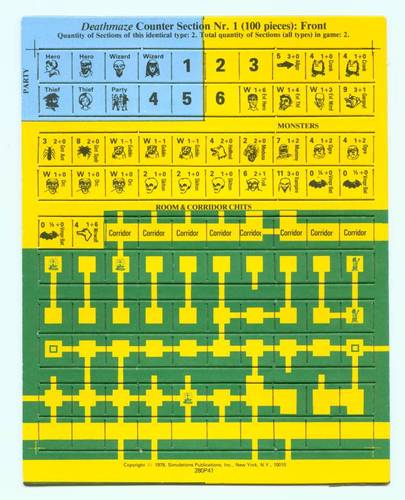 Counters are used in DeathMaze to represent rooms, corridors, monsters and player characters. Player character counters just have the character class and a picture on them. However, monster counters contain a lot of information such as whether or not the monster has a weapon, combat bonus and hit dice. The corridor counters don’t need an explanation, but rooms can have things such as trap doors, statues or fountains printed on them. Statues can turn into gargoyles or have potions or gems hidden in them. Fountains are usually flowing with either a potion or poison. You check the statue or fountain table to see what it is. Trapdoors can lead to other rooms, treasure or can be trapped. There is a specific table you roll on to check.

Before beginning play, the players roll up their characters. You pick a character class, weapon and spells. The standard character classes are thief, hero and wizard (advanced game). Each class has a certain number of hit points and magic resistance. However, before the game you can either increase his wound points by 1, make his weapon a +1 or increase a thieves detrap skill by +1. Wizards start with one magic skills, but have the option of taking a second spell instead of boosting stats or weapons.

The goal of this game is for at least half the characters to leave the dungeon alive with at least 75 experience points each and 100 gold each. If they have those, they may level up (just like in a role playing game).

Playing this game is easy, but requires a lot of dice rolling and consulting tables. You start by placing a corridor on the table. If there are any doors on it, you may place a room next to it. If you wish to go through the door you roll a D6. If you roll a “1” the door is trapped and you check the trap table to see what happens. Otherwise, you enter the room. Once inside the room, you roll a D6 to check for monsters. On a roll of 1-3 monsters are present and you roll on the room monster table to see who is there. You then check the monster’s counter to see how to roll for it’s hit points and do so. You may either attack the monster or attempt to negotiate with it. If your negotiation is successful there is no combat, but you get no experience points or treasure. If your party attacks and defeats the monster, you check the monster characteristic chart to see what type of treasure it carries. After that, you roll on the appropriate treasure table to see how much gold, gems and magic items you get. If there are any statues, fountains or trap doors in the room you roll on the appropriate table to see what they are. After you are finished with the room, you may place another room if a doorway is there or go back out into the corridor and put forth another room or corridor token. Anytime you go through a corridor or room you have visited before, you must roll a D6 and on a roll of “1” a wandering monster is present. This is the sequence of play and it continues until your dungeon party is dead or they return to the starting counter and leave the dungeon.

I found this to be a fun, but hard game. When your characters are first level, they can do very little damage. The traps can be really dangerous and some of the monsters are really tough. However, I do like the fact that you can negotiate with monsters instead of fighting them. When old school dungeon masters ran games, combat did not automatically occur when you encountered a monster. A lot of times, you were given the opportunity to talk your way out of the situation. The newer generation of dungeon masters are no longer inspired by original D&D and instead are inspired by video games so they are unaware of the fun and benefits that can be had by negotiating with an ogre instead of attacking him.

Wizards in DeathMaze are very tame compared to the wizards in today’s RPG’s. Every time a wizard casts a spell it reduces the wizard’s hit points, so a first level wizard can usually only cast one spell. Wizards spend most of their time fighting with daggers just like in original D&D. I like old school wizards, because they don’t ruin the game by being grossly overpowered. This game forces you to have a diverse cast of characters who have to work together in order to win. You need a thief to disarm traps, heroes for fighting and wizards for healing, sleep or charm spells. There is none of this silliness like today’s RPG’s where you can “Multi-class” and have a warrior who is part wizard, part rogue, part barbarian, part monk, part druid and part necromancer. Characters that are one-man armies bring zero enjoyment to gaming. The point of a dungeon delve is to work together with the other characters in order to win. It’s also what makes a dungeon delve fun.

Do I recommend this game? Yes, if you are into antique games and the older style of fantasy gaming. Most of the newer generation will probably prefer today’s dungeon delves with wonderful components and overpowered characters though.

Please see my video below about the expansion for this game that was printed in Moves Magazine #51.

Buy your own copy on eBay.