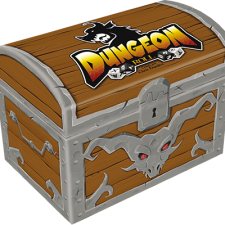 Dungeon Roll is a nifty little game by Tasty Minstrel Games.  It’s a press your luck dice game where you roll up a dungeon delving party and fight monsters and collect treasure.  This game comes in a neat little box that looks like a treasure chest.  Inside the chest, there are 7 party dice, 7 dungeon dice, 1 D10 level die, 36 treasure tokens, 24 experience tokens, 8 hero cards, 4 player aid cards, 1 rulebook and a book of heroes.  The quality of all the components is pretty good as far as dice games go.  The chest isn’t just a storage device.  It serves as a “cup” to hold the 36 treasure tokens during the game so players can draw them when needed without seeing them first.

Let’s go over what the dice are for.  The 7 party dice represent fighters, clerics, mages, thieves, champions and scrolls.  Each of the characters can destroy one of a monster type, but they also have a specific monster that they can destroy any number of.  Champions are an exception to this, because they can destroy any number of monsters of one type and open any number of chests.  Thieves can also open any number of chests.  The scroll allows you to re-roll any number of party or dungeon dice.  The dungeon dice represent monsters, treasure chests and potions.  Monsters must be fought, while opening chests and potions is optional.  Opening a chest give you a treasure token which can be an item that can be used in combat or just something that gives experience points.  The potions are extremely important in this game.  Quaffing a potion gives you one of your party member dice back from the graveyard and you can choose which side of the dice it gets.  What’s even better is it only costs one party dice to quaff ANY number of potions.  Potentially, you can use one party dice to get 1/2 a dozen back.  If you are wondering what quaff means, you are not alone.  Only total geeks like fantasy role players use this term.  It means to drink something.  The first time I heard a gamer use this word, I had to look it up at dictionary.com to get the definition.  The rulebook uses this term, thus confirming the designer is a total nerd.  Just Kidding!

Each player gets a hero card.  It is two sided and you flip it to the other side after getting a certain number of experience points.  The hero card gives you a specialty that can be used an unlimited amount of times and a tapping ability that can only be used once per dungeon delve.  All of these have certain advantages, but there is one that I do not like at all.  It is the Knight and it makes you change all scrolls to champions when you build your party.  Scrolls can be used to re-roll dice and are very useful in trying to re-roll monsters into potions or treasure chests.

Game play in this game is simple and straight forward.  When it is your turn, the first thing you do is roll the 7 party dice.  You can’t re-roll them unless you use a scroll.  Now, you can start on level 1 of the dungeon.  Your opponent rolls a number of dungeon dice equal to the dungeon level.  You put any dragons that were rolled into the dragon lair.  Next, you choose which dice to discard to kill the monsters.  After that, you have the option of opening chests or quaffing potions.  The last phase is the dragon phase.  If there are 3 dragon dice in the dragon lair, you must discard three DIFFERENT party members to defeat the dragon.  You also can use treasure tokens that say they can be used as party members.  If you defeat the dragon, the dragon dice go back in the dungeon dice pool and you get one experience point and one piece of treasure.  Strangely, tokens are used to keep track of experience points.  I guess a dice game can’t use a couple of D20 dice to keep track of XP.  After you complete the level you are on, you have the option of pressing your luck and going to the next level.  If you quit, you get XP equal to the number of levels you completed.  If you fail to kill the monsters on your level or fail to defeat the dragon, your turn is over and you get 0 experience points.

Each player does three dungeon delves and the player with the most XP wins the game.  In solo games, you just try to get as much XP as possible.  This is one of the few games I own that I like playing solo.  It only takes a minute to set up and is fun to play while watching TV.  Since this game uses very little brain power, it doesn’t interfere with my comprehension of whatever I’m watching on Netflix.

I like this game even though it has very little strategy.  The only strategies are deciding whether you are going to go to the next level, strategically using a scroll to try and turn monsters into potions and chests or using treasure items at the right time.  Luck is a big factor in this game, but that is to be expected with most dice games.  Dice games are meant to be simple to play, entertaining and fast.  Dungeon Roll is successful in all three of these areas. 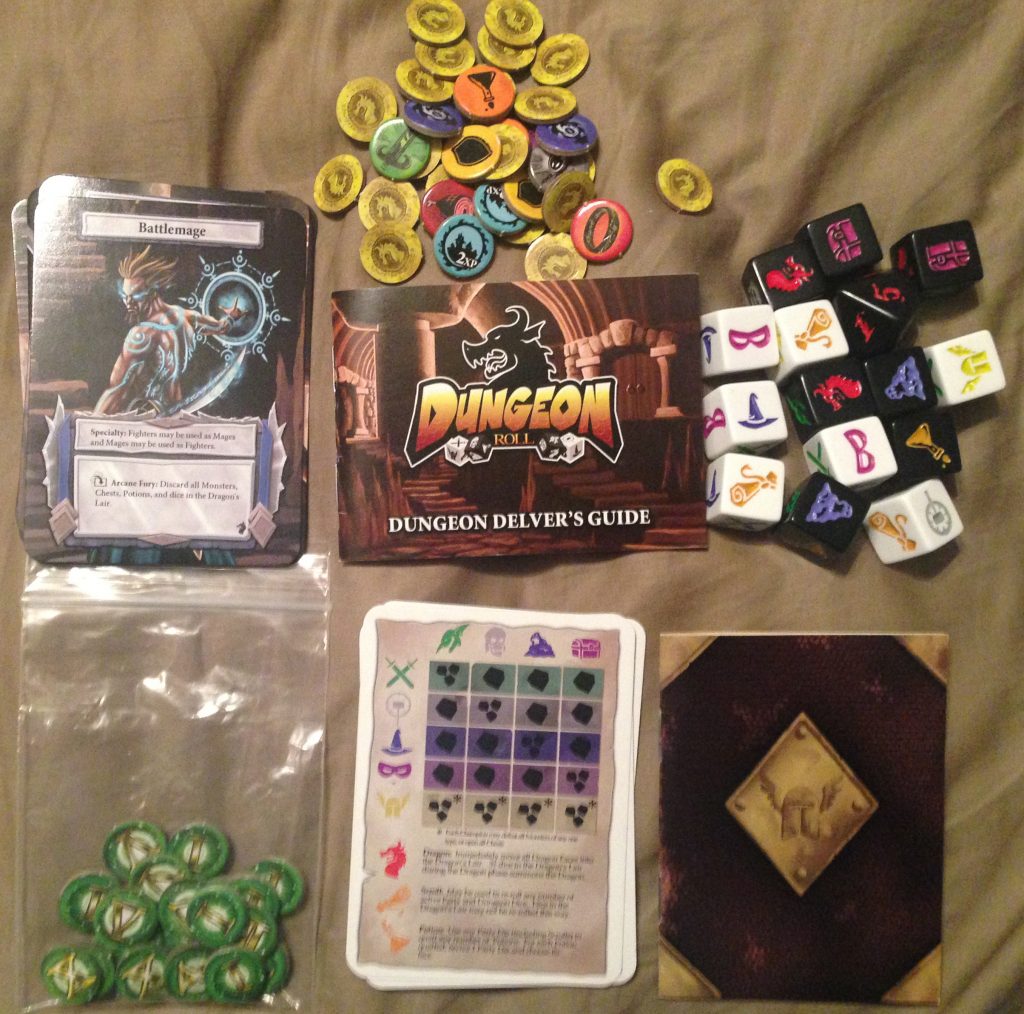