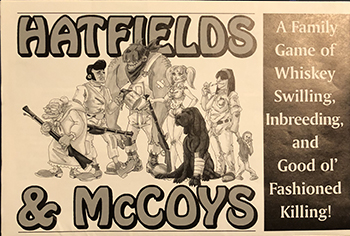 Hatfields & McCoys is a hex and chit wargame that was published in Competitive Edge magazine #13 during 1998. It claims to be a “Family” game of whiskey swilling, inbreeding and good ol’ fashioned killing. However, I can assure you this game is completely unsuitable for use as a family game (as evidenced by the picture of Ellie without her pants on in the rulebook) and instead is a low-budget wargame that is high on theme and low on re-playability.

The components in H&M are very low budget, but have good artwork even though some of it is black and white. In addition, the artwork is very thematic as is the rulebook since it is written in Appalachian slang.

H&M’s counters represent characters, whiskey, stills and houses. The character counters have stats for shooting, fighting, running and cussedness (death save). They have to be cut out and the front and back half folded and glued together. I had to deal with many of the counters “unfolding” while the glue was drying. The reason the counters have two sides is because the stats change if your character is all riled up (drunk). If you are going to have a low-budget game where the player has to cut out and glue together the counters, it would be best to have them just one sided. In this game, drinking whiskey could have just added +1 to the chits fighting skill and -1 to its shooting skill and saved the gamer the hassle of gluing together two-sided counters. In addition, I found an utterly bizarre problem with the counters. Both sides’ characters have the exact same names and to make things even more bizarre, many of the characters on a side have the exact same name. E.G. There are multiple Ellies and Beaus on each side. Perhaps the Hatfields & McCoys have mastered the art of cloning?

Included in H&M is a map with various terrain features such as hills, woods, swamps, roads, rivers and streams. It looks a little pedestrian, but visually is ok for this kind of game. However, there is absolutely no terrain key and the rules only tell how rivers, woods and swamps affect movement. Why have roads all over the map when they don’t increase movement? In addition, what’s the point of having hills if they don’t slow down movement? This really ruined the game, because many of the characters move very slowly and the woods and rivers slowed them down even further. If roads could have been used to speed up movement, it would have greatly helped this game.

There are two different ways for a game of H&M to end. The first is when all the characters on one side are dead and the second is a shotgun wedding. A shotgun wedding occurs when a Beau and an Ellie are fighting and one would die, he/she instead lives and a shotgun wedding occurs. In this case, the side that gives away the bride forfeits two jugs of whiskey and victory points are tallied. Each side gets 1 victory point for each jug of whisky they possess and each Elmer in the bride’s family counts as an additional jug.

The game setup is done first by whichever player rolls higher on a D6 dice. Each player places a shack and a still and puts the appropriate characters with each to start the game.

The sequence of play (in regular English) is:
1) Initiative
2) Stills produce whiskey
3) Movement and melee
4) 2nd Melee or shooting
5) Reinforcements

Each turn begins with both players determining who will go first. Initiative is determined by rolling a dice or one player secretly hiding a chit in one hand and the other player trying to guess which hand it is in. If the player guesses right, he goes first. This phase was very tiring and didn’t serve much of a purpose since whenever you attack a unit; it gets to fight back simultaneously. Sure, initiative lets one side move before the other, but that slight advantage didn’t seem to be worth the roll off every turn in a game that could potentially last many turns. Initiative should have just been determined at the beginning of the game and used for every turn. Perhaps, the side going second could start with one or two extra units to make up for it.

Whiskey is spent in this game to get a character drunk and allow it to fight better in melee, but worse in shooting. Each turn your whiskey still produces one whiskey. You can destroy your enemy’s still if you can reach it and only Gramps can fix it.

Movement and melee occur in the same phase. Some of the characters move really slowly and if your basecamps are far apart, it’s going to be a really long game. As mentioned before, there are no rules for roads and as such there is no way to speed up movement. The phasing player can declare melee between two characters in the same space. Either player can spend a jug of whiskey to get their character drunk and allow him to fight better in melee until the end of the turn. If a character is killed, it roles against it’s cussedness for a death save. If it fails, it dies but can come back as a reinforcement later in the game. Unfortunately, this is one of those games where the dead keep coming back and the game can go on for a really long time.

In the next phase, your units can do either a 2nd melee or shooting. You can shoot into or out of woods, but cannot shoot through woods. Most of the killing takes place in this phase. Beau and Granny have shotguns, which have the capability of hitting every unit in a hex. Stacking too many units in a hex can cause you to lose the game.

The reinforcements phase occurs at the end of the turn and each player rolls to see if they get a reinforcement. If they do, they roll on the relations table to see what character it is.

This game plays like a scenario-less wargame where each side basically starts on opposite sides of the board with the exact same units and then has to try and wipe each other out or have a shotgun wedding. Whichever side aggressively tries to attack the other is at a severe disadvantage since they start with the exact same units. It’s fool-hearty to try to assault the enemy without a numerical advantage and units that move at different speeds have difficulty showing up at the enemy camp at the same time. Sure, you can stack everything together in larger units and move at the speed of the slowest unit towards the enemy, but the defender will just wait for you and wipe out your forces with a few shotgun blasts. To make matters even worse, almost all the units killed will eventually return during the reinforcement phases and the game will go on for an uncomfortably long time unless there is a shotgun wedding.

I found this game to be high on theme and artwork, but failing to deliver an enjoyable experience for either player. Every wargame needs carefully thought out scenarios to make it a good game and this game completely failed in that regard. In addition, nearly infinite reinforcements really ruined this game and I was utterly delighted when my opponent defeated me, because I was afraid this game would never end. Thus, I can’t recommend this game.

View the components in the unboxing video below: