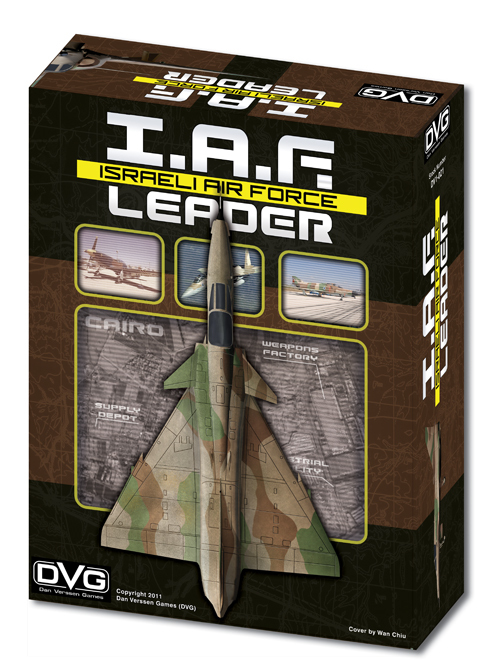 Israeli Air Force Leader is a scenario based, solitaire game where you build your own squadron and fly different campaigns from various periods in Israel’s history. The scenarios go from the War of Independence all the way to a hypothetical future war in 2022. Most of the scenarios are historically based, but 2 are what-if scenarios. The first is a scenario where Israel flies retaliatory strikes against Iraq during Desert Storm and the second is the 2022 scenario where Russia and the Arab states have joined forces to try and remove Israel from the map. Regardless of which campaign you choose; you have the option of making it a short, medium or long scenario. The scenario determines the number of days in the campaign and you will run 1 or 2 missions each day. Each mission only allows a specified number of aircraft, so only some of your aircraft participate in each mission. Your pilots collect experience points that they can use to “level up” and they also accumulate stress points. Too much stress will cause a pilot to have lower performance in air-to-air and air-to-ground missions. A pilots cool rating, allows him to remove some stress at the end of each mission.

The components included in this game are higher quality than the “typical” wargame. All of the counters are thick and appear to be specially cut in such a way that they do not need to be clipped. The map is mounted and has the sequence of play printed on it. I wish all wargames did that. It also has a turn track and spaces to put your target deck, event deck and escalation deck. The rulebook is 35 pages long and is printed in color with good pictures and illustrations. There are 9 scenario sheets that give you a mission and a certain number of points to buy special weapons, pilot skills, etc. In addition, standard weapons and special weapons are listed. Each scenario has a date and you can only pick aircraft that were used during that time frame. There are also three charts. One is a standard player aid chart, one lists pilot skills and the third lists key terms used in the game. Last, there is a player’s log, which you use to keep track of your pilot’s experience, rank and cool rating. It is recommended that you photocopy this, since you will be writing up a new one each scenario.

When playing this game, the first thing you do is to pick a scenario. The number of aircraft and pilots experience level is determined by the year the scenario occurs and whether it is a short, medium or long scenario. The longer the scenario length you pick, the more SO points you get to spend on weapons, skills and pilot upgrades.

After picking a scenario and forming your squadron, it is time for the preflight phase. In this phase you draw target cards and select a primary target and possibly a secondary target. Next, you place anti-aircraft sites. Some of these can attack low aircraft, some high aircraft and some at any height. The anti-aircraft sites located in the center area can fire 360 degrees. AA located in approach areas with a range of at least one, draws a chit to determine which directions it can attack and be attacked from. After this, you assign pilots to the mission and do the most important step – arming your aircraft. Each bomb, missile, ECM pod, etc. has its own stats and some are best for soft targets, dispersed targets, suppression or air combat. You will quickly learn what weapons work best on which targets or your squadron will not have any success. You must tailor your pilots and weapons to your target.

The target bound flight takes place next. You start by drawing an event card and then placing your aircraft on the board and choosing high or low altitude for each one. The enemy aircraft are placed next and your intel score will determine if the numbers of any of the air defense forces are changed. After that, you resolve another event card and turn 1 begins.

Now, you begin the over target phase. This phase occurs 5 times. First, your pilots with a fast attack rating attack air or ground targets. Next, bandits and ground sites attack your forces and your pilots can try to suppress or evade. Suppression is done by firing back at the enemy to cause him to miss. Evasion causes the enemy to roll 2 dice and use the lowest. Evasion will give your pilot 2 stress points though. A successful enemy attack will cause your plane to either take 1 stress point, become damaged (lose all weapons and take 2 stress) or be destroyed. After this, your pilots with a slow attack rating get to attack. You may now move your planes and the enemy aircraft move right after you.

After you have either done enough damage to the main target to destroy it or have used all 5 of the target phases, the home-bound flight occurs. You simply remove your planes from the board and resolve an event card. If any of your aircraft were shot down, you roll to see if search and rescue was successful. Also, you adjust the invasion level if you failed to destroy a target with the invasion trait. Last, you draw an escalation card if your target called for it.

Now that the flying part of the mission is complete, you perform the debriefing phase. You record experience for each pilot and adjust recon, infrastructure levels and special option points. Now for the bad part, each target area has a stress level and you have to add this to the stress level for each pilot who flew. Pilots with a positive cool value can reduce their stress level by the amount of their cool value.

That’s how one mission is flown. Each campaign has many days of flying and some days will have 2 missions if you draw a card with a secondary target.

How do I like the game? I like both of them. If you’re confused, it’s because every solitaire wargame is actually two games. The first game is the game where you play the rules and scenarios EXACTLY as written. The second game is where you tweak the game so you can run custom scenarios, situations, etc.

The included scenarios are a lot of fun and you will learn through experience how to build a squadron with the right planes, weapons and pilots for the targets awaiting you. You must tailor your weapons for each mission/target in the campaign and determine the best direction to attack from to avoid being torn up by enemy forces. Your pilots who survive will eventually level up just like in a role playing game and become better and better.

What makes this game amazing is the wide variety of weapons, aircraft, pilot skills and enemy forces. I created some custom scenarios such as a fight between 5 F-35 aircraft and 15 modern Soviet aircraft. The F-35’s should be nicknamed genocide birds, because they annihilated all the Soviet forces in a short period of time with only one of them taking damage. Their missiles and stealth characteristics along with the ECM pods I purchased, made them difficult for the enemy to first see and then hit. I also adjusted the allowed weapons on some of the standard campaign missions just to “see what would happen.” In addition, I added an extra rule that forces your planes to fly off the map during the home bound phase and they have to roll to see if any “extra” enemy fighters show up on their way home.

I am very pleased with this game and recommend it to everyone who has an interest in the Israeli Air Force.