Khe Sanh ’68 is a solitaire board game about the battle of Khe Sanh by Decision Games. This is a standalone game using the Cold War Blitz rules. In this game you control U.S. and ARVN forces in an attempt to protect Khe Sanh, Lang Vei and the Rock Quarry. In addition, it’s your job to clean out and occupy all the NVA entrenchments, hill tops and route 9 spaces. You also get points for killing NVA, but lose points for each allied ground or air unit destroyed. The higher the kill ratio the better, just like in the real war. 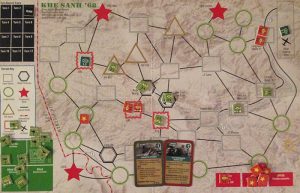 The map is not hex based and is instead a point to point map. The terrain represented is open terrain, jungles, hills, entrenchments, fire bases, communist bases, air bases and an allied staging area. There is also the important turn track on the map, air available box, used air box, allied reinforcement box, allied unit eliminated box, OPFOR reinforcements box, OPFOR units eliminated box and OPFOR unit break off box. The map works really well for this game, but I wish it had the OPFOR random placement table printed on the map like Decision Games did for Suez ’56.

Decision Games has made a significant improvement in counter quality for this game compared to some of their older mini games. On some of the older games, it was hard to punch out the counters. They punched out easily and neatly for this game. The 40 counters represent ground units, air units and a turn marker. The first number on a ground unit is it’s combat strength and the second is movement. Some units are two steps and some are one. Air units have only combat strength because their movement is unlimited. Combat strength represents the number of dice rolled for the unit in combat.

There are 9 campaign cards for the allies and 9 for the NVA. On the top right is a number that says how many turns you move the turn marker up or down the turn record track. The game ends when you have finished turn 1. The text of the cards do things like move NVA units, add to the combat strength of certain units, bring in reinforcements, return eliminated units to the battlefield and move the turn counter up or down the turn track.

The base rules included in the game are called Cold War Blitz and are also used in Suez ’56. If you already know them, you only have to read the Khe Sanh ’68 scenario rules. Both rules combined have a total of 6 pages and take less than 20 minutes to read. The rules are very clear and can be easily learned by both beginners and experienced gamers.

Setting up the game is easy and straight forward. First, the turn marker is placed in the “9” position. Next, the allies place 6 specific units divided as they please on Khe Sanh, the Rock Quarry and Hill 861. In addition, they place the B-52, 4 air strikes, 1 helicopter transport and the AC-47 in the air available box. All other allied ground and air units go in the reinforcement box. All of the NVA units are placed in the specified starting locations face down. They don’t get turned face up until they are attacked by ground or air. At the end of each turn they are flipped upside down again. This makes it difficult to know where the NVA anti-aircraft is located. NVA anti-aircraft is effective in this game.

There are 12 phases in each turn, but don’t let that intimidate you. These are very simple to follow. The ground combat phases will be explained in detail below this table. They are:
1) Friendly Action Card Phase – Choose one card and play it
2) Friendly Reinforcement Phase – Place any reinforcements your card says to place into the staging area. Air reinforcements go in the air available box
3) Friendly Ground Movement Phase – Move ground units on the map applying terrain effects from the terrain effects chart
4) Friendly Air Movement Phase – Place air strikes and move ground units with helicopters
5) NVA Anti-Aircraft Phase – If an air strike other than a B-52 attacks a space with AA or a helicopter landing takes place there the enemy fires at it. Any ground unit in a helicopter shot down is also destroyed.
6) Friendly Air Attack Phase – Roll dice equal to the total combat strength of all your attacking aircraft and consult the air to ground section of the combat results table.  Enemy losses are assigned to the unit with the least combat strength.
7) Friendly Ground Combat Phase – Explained in detail below
8) NVA Action Card Phase – The top card of the OPFOR deck is played
9) OPFOR Reinforcement Phase – Any reinforcements called for by the card are played. In addition, units in the break off box are placed with the Communists Random Location Placement Table
10) OPFOR Movement Phase – Move any units specified by the card
11) OPFOR Combat Phase – The same as friendly combat phase.
12) Admin Phase – Flip all communist units upside down, roll to try and bring back used air units and move the turn marker down by 1.

Ground combat is done by first determining tactical superiority (fancy name for initiative). You roll one dice for the allies and one for the OPFOR. If either has a special forces unit or helicopter recon add +1 to the roll. The winner will fire first. Line up the OPFOR units from strongest to weakest and then line up the allies in any order you wish. The side with tactical superiority goes first. You roll the number of dice equal to the first firing unit’s combat strength and consult the combat results table. Terrain may prevent some retreats. In addition, if the NVA is supposed to retreat from a jungle or hill it instead is put in the break off box. Allies who have to retreat, may use an available helicopter to evac to an airbase. NVA anti-aircraft get a chance to shoot it down though. You alternate back and forth from one sides’ surviving units to the other. If both sides still have units after one round, the procedure repeats until only one side has units left. If an armor unit is on the winning side it may move one space in a pursuit move. If that move puts it on a space with an enemy unit, combat ensues.

The game play consists of the allies conducting massive amounts of airstrikes, air assaulting route 9 with 1st Cavalry units and lots of fighting for communist entrenchments and hills. The OPFOR cards that bring eliminated NVA units back into play, sometimes bring them back to entrenchments you already took. It’s not uncommon to fight over the same entrenchment multiple times in the game. The most dangerous OPFOR cards are the ones that cause NVA units to attack nearby allies units or Khe Sanh directly. If all your forces are eliminated on Khe Sanh, you instantly lose. Out of 12 games that I’ve played, I’ve only lost twice. I learned quickly to keep 3 units at Khe Sanh. If the game ends because turn 1 on the turn track was completed you add up the victory points to determine victory or defeat.

This game has two short-comings that are easily rectified by adding 2 house rules. The first is the fact that the NVA doesn’t have any artillery other than one effect on one card. In the actual battle, the Marines at Khe Sanh were under massive and sustained artillery fire. I added a house rule that has the enemy fire artillery at Khe Sanh on the beginning of each turn by rolling one dice. If it is a six, the weakest unit on Khe Sanh loses a step. In most games, only one step will be lost due to artillery but I had one odd ball game where the U.S. lost a total of 3 steps to artillery. The second short-coming is the fact that Lang Vei may not be attacked on the first turn. In real life NVA armor (yeah, I said armor) and infantry overran Lang Vei before most of the events at Khe Sanh. To rectify this I made a house rule where the 3 units in the NVA’s initial setup in Laos get the armor unit and 2 of the 2-2 infantry units. On the first turn they always attack Lang Vei (even if the OPFOR card says for them to go to the nearest communist base). This almost always results in Lang Vei being overrun and the special forces unit there being either defeated or retreated.

Overall, I found this to be a delightful solitaire game. It’s always a quick, fun game to play. Like any good wargame, you can tweak it with house rules to either make it more realistic, historically accurate or more fun. This game is the best $12.95 I’ve ever spent.