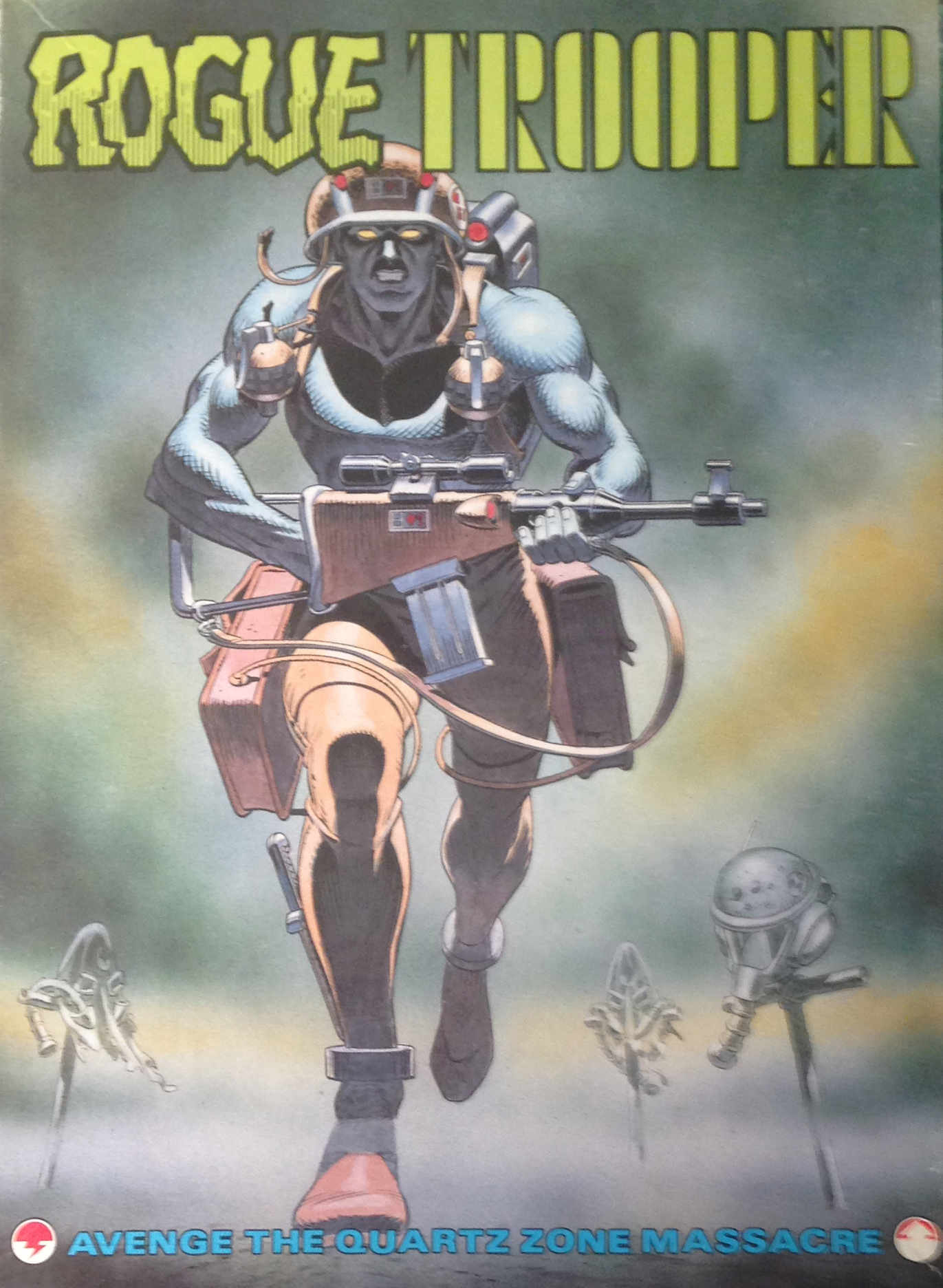 Five or Six years ago, I was at Concentric Convention and a friend of mine who deals in used board games asked me if I wanted to take a look at what he was selling.  I immediately saw that he had Rogue Trooper the board game.  Rogue Trooper is a comic book I used to read when I was in the military.  I had no idea that Games Workshop had made a board game for it in 1987.  Without reading the box to see what kind of game it was, I told my friend I wanted it.  Foolishly, I showed my excitement and my friend talked me into paying $50.00 for it.   $50.00 actually isn’t that bad a price for an unplayed copy of this, but I’m usually able to get a better deal than that. 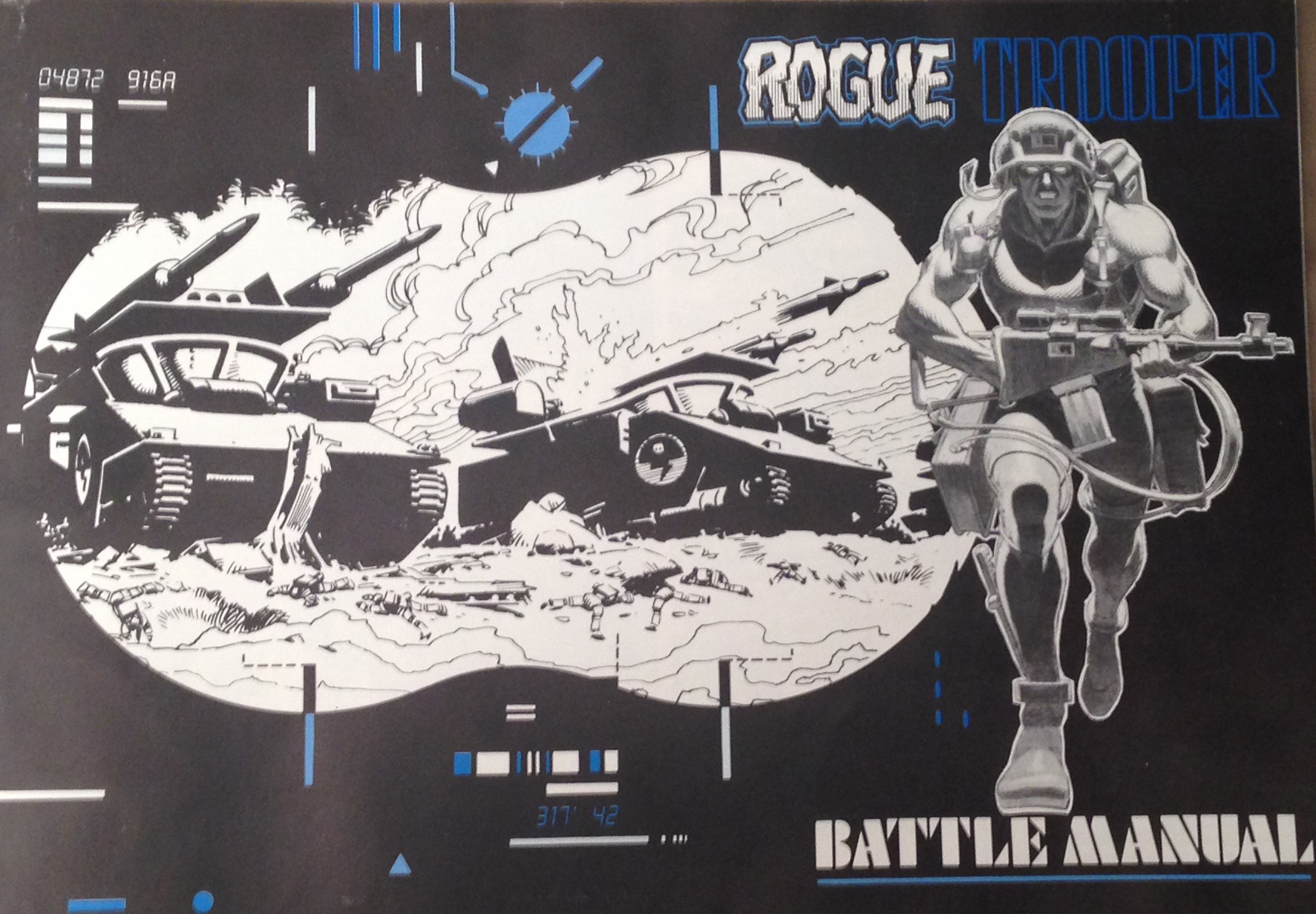 When I got home from the convention I excitedly opened the game and was delighted to see that it had six genetic infantry miniatures.  I always wanted a Rogue Trooper miniature.  Next, I read the rules and to my dismay, I found that they were written in a confusing, overly complicated matter and to make matters worse the game was not a shoot ’em up game like I was hoping for.  It was a mission based adventure game where you complete missions in order to find clues to the whereabouts of the traitor.  After reading the rules, I had zero interest in playing the game and it sat on my shelf for five or six years.

A few weeks ago I was looking for something that was a little different to review for this website, so I took Rogue Trooper off the shelf and decided to give it a chance.  It is amazing how a board game box can get noticeable shelf wear by just sitting on a shelf and doing nothing.  I brushed off the dust and started reading the rules.  Just like before, I found the rules to be confusing and written in an overly complicated matter.  However, after studying the examples of play section I found the rules to be actually fairly simple, but poorly explained. 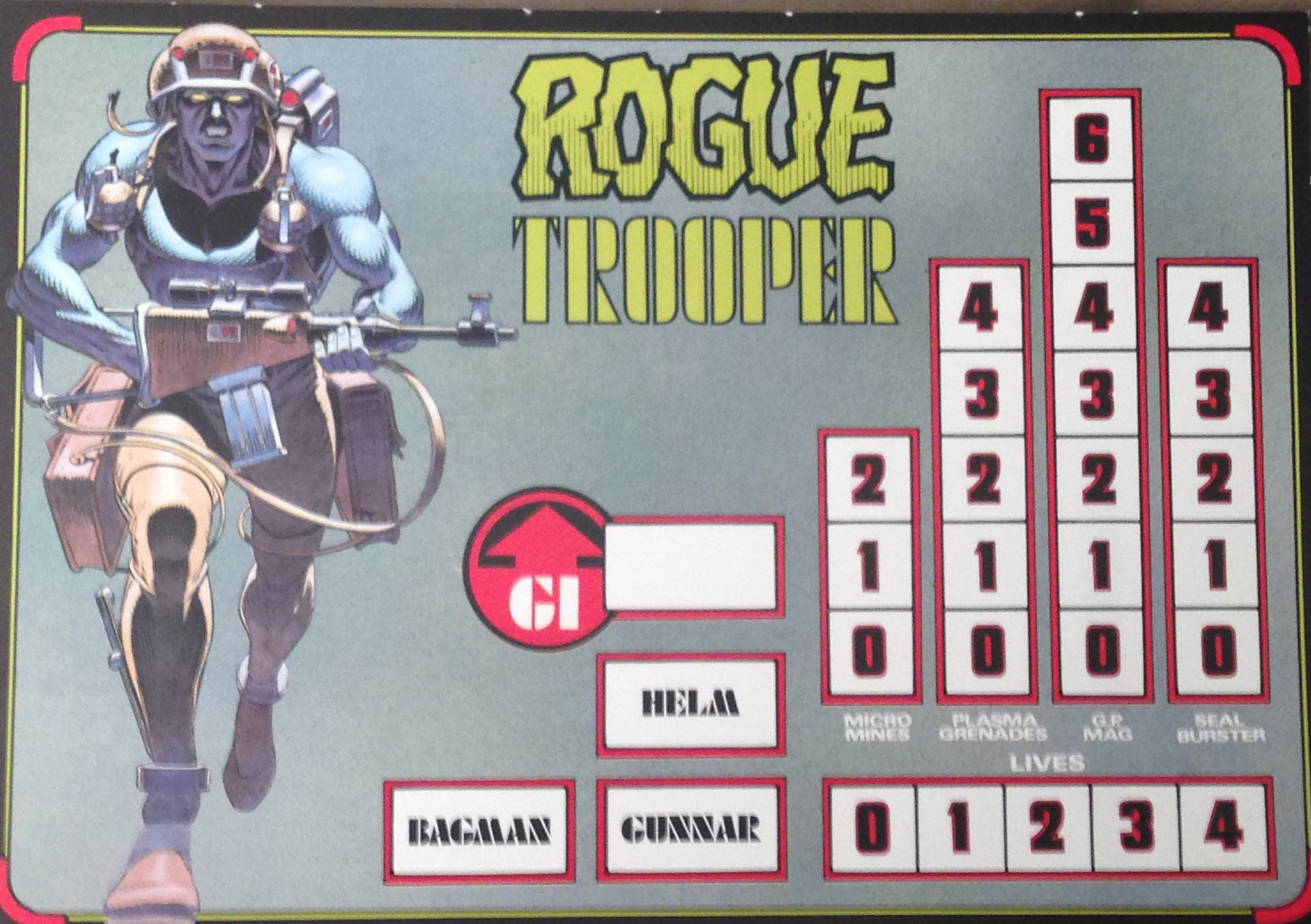 The components in this game are a map, 6 miniatures, 6 character sheets, one trader playing piece, 70 counters, 283 cards, rulebook, survival guide and 6 dice.  The map is sturdy and hex-based, representing areas on Nu-Earth and Milli-com.  All 6 Rogue Trooper miniatures are the same except for the color.  They look good and I don’t understand why the trader wasn’t a miniature instead of a cheesy, paper playing piece.  The counters are used with the character sheets to record bio chip locations, lives, ammunition markers, etc.  Included is a survival guide which gives some background on the Rogue Trooper universe, equipment, bio chips and encounters.  The 283 cards are low quality because they are made of small, flimsy pieces of paper and have small type on them. Overall, though the component quality is really good except for the cards and traitor.

Setting up the game is overly explained in the rules and is actually very simple.  All you have to do is give each player a character sheet, a miniature, 4 ammo tracking counters, a bio chip and a life counter.  Next, each player draws a numbered bio chip counter from a cup to see how many additional bio chips they get and chooses what equipment to put the bio chips on.  They draw 3 rogue cards, 2 D6 supply cards and 1 mission card (which they may refuse and draw another instead).  The supply cards determine how much ammo and equipment the rogue has and he records it on his character sheet.  Finally, they draw a drop zone token from a cup to see what drop zone their miniature starts in.

Let’s explain what these mysterious bio-chips are that I keep referring to, in case you are not familiar with the comic book.  When a genetic infantryman dies his personality and brain waves are transferred to a bio-chip so it can be installed in another body later.  In the meantime, other genetic infantrymen can install these chips on their rifle, helmet or backpack.  These chips have a voice synthesizer and can talk to the Rogue Trooper and make his equipment work better.  In game terms – chips in weapons improve some firepower rolls.  Chips in helmets double firepower against armor and help with missions involving battle computers and help you pass through security on Milli-com.  A chip in your backpack allows you to fire a second salvo since it uses a remote control arm to hand you ammunition.  It’s best to have chips on all your primary equipment. 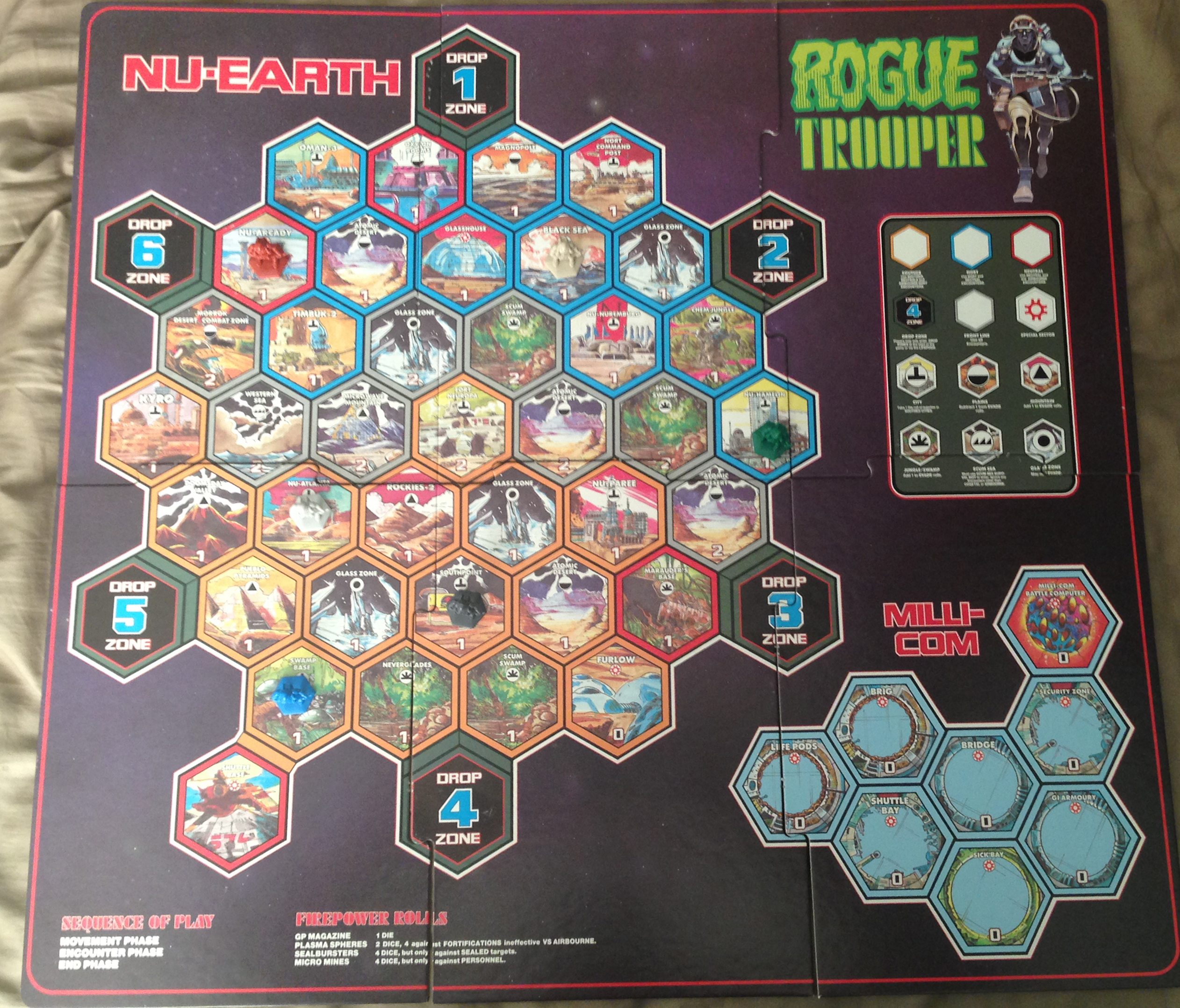 The game begins with the owner of the game taking the first turn.  The turn sequence is movement, encounter and end phase.  GI’s are trying to move to the location on their mission card and move 1 hex unless they play a Rogue card that enhances it.  Encounters consist of either GI encounters or Battlefield Encounters.  GI encounters are when you land on a hex with another GI.  You can either attack, kidnap your opponent’s companion, exchange companions, exchange missions, exchange clues, trade or do nothing.  Battlefield encounters occur when you land on a hex and there is not another player there.  Your opponents looks at the encounter number of the hex and plays that number of encounter cards against you in descending order of initiative.  Some encounters are things you have to fight, some are free equipment, some are companions who help you fight and some are things you have to evade instead of fight.  The end phase only occurs if you just completed a mission by landing on its prescribed hex and surviving all the encounters.  You are given a clue and can draw enough rogue cards so you have 3 again.

Combat is rather simple in this game.  First, you try to avoid combat by evading.  Evading is done by rolling a dice and trying to get higher than the initiative on the encounter card.  Your result is modified by some types of equipment and the type of terrain you are on.  If you successfully evade, that encounter is over.  Otherwise, you fight.  The encounter has a firepower rating and your opponent rolls that number of dice and sums their totals.  You check your character sheet to see how much ammunition you have and what kind can be used against this specific target.  The amount of dice you roll is determined by ammunition type and the amount you use.  Companions can give you extra dice to roll also.  If the total exceeds what the encounter rolled you win.  Otherwise, you lose one life.  In some situations, you can choose to surrender rather than fight.  If you surrender, you lose all companions, equipment and ammunition and go to jail.  You get a chance to escape every turn by rolling a 5 or 6.  If you escape, you get to roll for 1 D6 supply cards.

Rogue cards are used by all players to either help their character or trip up their opponents.  They can only be played in the phase written on the card.  Some of the more memorable ones cause players to lose turns, some are get out of jail free cards and some give you an extra clue card.

Once you get all four unique clue cards, the traitor shows himself and is placed on the bridge in Milli-com.  Weapons are not permitted on Milli-com so you have to fight him hand to hand.  You add your number of lives to your die roll when fighting the traitor and so does he.  Your opponents may not play rogue cards against you while you are fighting on Milli-com, but you can use them to help yourself.  Once the traitor dies, you win the game.  If at any point in the game, one of the players is killed, the nearest Rogue Trooper retrieves his chip and installs it on his equipment.  Those two players are now a team.

My friend and I tried the game and we had to redo a few of the turns in the first game because we forgot to do things like take into account that swamps help evasion rolls and Southern cities allow you to draw additional supply cards.  Once we got the rules ironed out my friend’s character was killed due to continually going to hexes with higher encounter ratings.  We decided that instead of installing his chip on my GI’s equipment we would call the game a learning experience and try again.

The second game went much better than the first.  We both were able to quickly complete some missions and get clue cards.  However, some of the clue cards I got were repeats of ones I already had so that meant more missions for me.  I managed to get three unique clue cards before I failed an encounter which caused me to have to fight 3 additional encounters.  I ran out of lives and my GI was killed.  My friend retrieved my chip, clue cards and equipment.  He completed another mission, which gave him the final clue card he needed.  The traitor was placed on the board in Milli-com and my friend defeated him.

I was surprised how much I liked this game once I got to play it.  As I mentioned, I didn’t like the rulebook but the game play is really good and a lot of fun.  My friend also liked this game a lot and he usually prefers to play historical games.  The moral of the story, don’t judge a game until you have actually tried it.  Just because a rulebook doesn’t interest you doesn’t mean you won’t like the game.  I regret having let this game sit unplayed on my shelf for five or six years.

Buy you own copy on eBay.