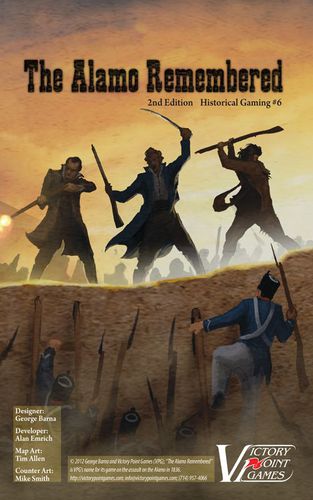 The Alamo Remembered is a revised and republished version of the 1974 Conflict Magazine game The Alamo! It’s a very fast, simple and mostly dice-less Alamo game that can be played with one or two players. The Texians always lose so the game only has value as a simulation. I’ll never understand why Victory Point Games chose to do a reboot of a nothing game instead of an outstanding one. The market is flooded with nothing games and gamers need another nothing game like they need a hole in their head. The original magazine game is rated a 3.4 on BoardGameGeek for God sakes.

However, the components included in the boxed version of this game are all very high quality. There is a four piece mounted map that looks great, counters, rulebook and one dice. 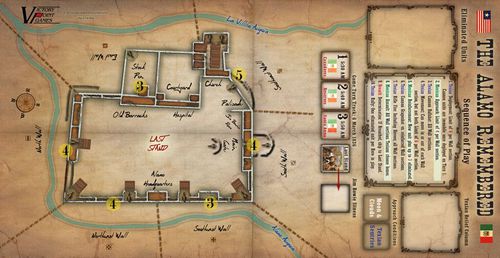 The map has the Alamo sectioned into 6 wall sections, but when the Texian counters are setup they felt really crowded especially in the Southeast Wall. The sequence of play is printed on the map along with a space for the optional Texian relief column, eliminated units, game turn track and Jim Bowie Illness box.

Victory Point Games did a great job on the laser cut counters. They have fantastic artwork and are thick and easy to pick up. The counters represent Mexican units, Texian units, dummy units, heros and some informational markers. Each counter has a number on it that represents strength.

The rulebook is in full color and has 10 pages of rules followed by 2 pages of historical notes. When I read the rules, I found them super easy to understand. The reason for that is because this game is very low in complexity.

The best way to describe this game is through the sequence of play:
1) The Texans deploy their units and decoys upside-down and cannons to whatever walls they wish, but may not have more than 6 units there. This step only occurs on the first turn.
2) The Mexicans approach with all their non-reserve units and decoys upside-down, but may not have more than 4 per wall. All dead Mexican units re-enter the battlefield on turns 2 and 3.
3) All Texian cannons fire ballshot and reveal themselves.
4) Texian units may move into or out of a wall section, but not both
5) The Mexicans deploy the reserve unit for the turn along with up to 3 eliminated units
6) The Texians may fire grapeshot at any wall section that was just reinforced by the Mexicans
7) Texian Rifle Fire
8) Mexicans assault and Texians chose losses
9) Check if a breech has occurred. If so, go to Last Stand phase.
10) Texians bring one unit back to life for each hero still in play
11) If it’s the end of the third turn go to the last stand phase

The Last Stand Phase has the following steps:
1) Determine if Jim Bowie enters play
2) Texians fall back and all cannons are destroyed except those at breeched walls which are captured.
3) At any breached wall the Mexicans may move up to two units from adjacent walls to the breech.
4) All the Mexican units and captured cannons fire
5) Surviving Texian units fight hand to hand
6) Eliminate all remaining Texian units
7) Determine victory level. They range from a humiliating Mexican victory to a Mexican triumph.

Note: The ranged and melee combat in this game just uses the strength value of the attacker and automatically eliminates that number of enemy counters.

There is very little strategy in either the solitaire or multiplayer version of this game. Since this is a bluffing game, both sides begin with their units upside-down so the enemy doesn’t know which of your units are decoys and which are real. After the setup, the only decision the Texian player makes is what walls to reinforce. The only decision the Mexican player makes after initial setup is what walls to attack.

I hate to say this, but I found the game to be pointless. The lack of strategy and certain outcome makes the game only good as a simulation. It’s interesting to play for exactly one game just to see what happens, but I never felt like I accomplished anything by playing. My opponent seemed to like the game though and liked the fact that the Texians do not survive any turn where a wall breech occurred. He found that to be very historically accurate.

Victory Point Games should concentrate on producing more of their outstanding States of Siege games instead of rebooting games like this. This game feels like something that should have been a ziploc bag freebie that’s given away at conventions as a marketing gimmick. It isn’t substantial enough to be a commercial product. Please note that I took into account the fact that my opponent liked this game when assigning it’s numerical scores below. If I would have just taken into account my opinion, this game would have scored far lower.

Watch the unboxing video below to see the components: