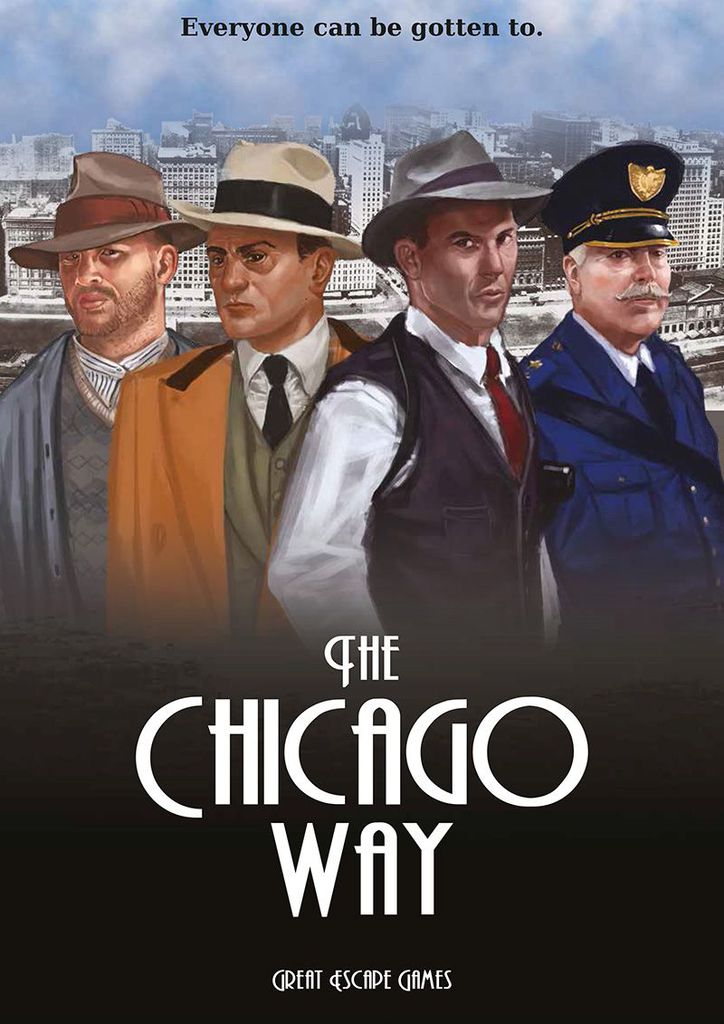 The Chicago Way is a card driven prohibition era miniatures game by Great Escape Games. The rulebook includes a deck of cards and some tokens that you can cut out of the book. You can use any company’s line of 28mm miniatures, terrain and buildings. The official miniatures and terrain are very nice, but the official laser-cut tokens are very disappointing. This review is very similar to the Dead Man’s Hand review I wrote since the rules are almost identical except for new gangs, some new weapons and the inclusion of rules for automobiles.

Cards are used more extensively in this miniatures game than in any other I have played except Malifaux. Your gang has a certain card suit associated with it. The scenario you choose to play dictates how many cards are in a player’s hand and how many remain in the deck. Aces are high and jokers are low. There is text written on the card for events. The value of the card is used for initiative and canceling another player’s card. If a player plays an event on a “5” card, you can discard a “5” card to cancel it.

In each scenario you choose your gang. They can be police, prohibition agents, gangsters or moonshiners. Each gang has different stats for its characters and a few special abilities. Notably, the police have night sticks which allow them to re-roll their close combat dice (a powerful ability indeed). The stats for the characters are weapons, hits, nerve, shoot, hand to hand and rep. Weapons is obvious, but hits is the number of under fire markers a model may have before going out of action. Nerve is essentially morale and the lower the number the better. Shooting is a just a modifier that is added when you shoot. Hand to hand is obvious, but rep is how many points a model costs.

Each turn in the game begins with initiative. This game has the most tedious initiative procedure I have ever seen. Each player draws a card and places it face up by a model. Next, they draw more cards and place them face down by their other models. After all models have a card, the facedown cards are then flipped over. The values of the cards determine the order the miniatures activate with high going first. If you drew all low cards, it is possible for all your opponents’ models to activate before yours and defeat you on the first turn in some scenarios. I don’t like this excessive randomness. You can have the strategy skills of Alexander the Great and lose this game because you kept drawing low cards for initiative. If your models are in a building, it’s difficult to place the cards next to them.

I would have liked there to be a more fair initiative procedure. Having both players draw one card with the high going first and then each player alternating activations would have been better. Both my play tester and myself complained about initiative in both this game and Dead Man’s Hand.

Each model gets 3 actions (unless he’s drunk and complacent) and they must be declared before doing anything. They are move, aim, shoot, reload/change weapon and recovery. In addition there are two interrupts called duck back and quick shot which can be done instead of taking your normal 3 actions.

Movement actions allow a model to move up to 10cm, but the model may not get closer than 2cm to an enemy model. If your model moves to within 2cm of a wall or a ladder, it may jump the wall or climb up to 8cm for free. During movement a model may use an additional movement action to move the final 2cm into base-to-base contact with a model and initiate hand to hand combat. For hand-to-hand combat each player rolls a D10 and adds the appropriate hand-to-hand modifiers. The player with a lower score gets under fire markers equal to the difference. In subsequent turns, the model with the highest initiative card may then continue the hand-to-hand combat or break off.

The aim action allows a model to add +1 to all his following shots that turn. It is also possible to aim twice and add +2 to your following shot.

Shooting has a lot of modifiers and for simplicity; I am not listing all of them. Each weapon has a maximum number of shots it can take per turn and its range bands are different. Point blank range adds a +1, close adds a +0 and long adds a -1. Shotguns have big bonuses, but may only be used at point blank or close range. The results of shooting are either no effect, adding an under fire marker, adding an under fire marker and nerve test or putting a model out of action. The under fire markers are a unique mechanic for this game. Sometimes, they seem to represent wounds and other times seem to represent how shaken a model is. Either way, if a model receives more under fire markers than its “hits” number it is out of action.

The reload/change weapon action is self-explanatory. Some models can carry more than one weapon. If a model rolled a “1” in the shooting phase, it is out of ammo unless it is carrying two pistols.

The interruption actions are what make things interesting. If an opponent declares he is going to shoot your model multiple times, you may choose to duck back. This allows you to move 10cm away into cover after the enemy fires his first shot at your character. The drawback to this is your model loses his activation phase for the turn. The other interruption is quick shot. This may be used to fire at a model while it is moving or to take a shot before the other model (provided you are at long range). Just like ducking back, this causes you to lose your activation for the turn. What is cool about this is if your enemy is jumping from one rooftop to another, you can shoot him while he is in mid-air and cause him to fall. Falling causes additional damage to occur.

Events listed on the cards in your hand can be played in the phases they specify. Most of the events are overwritten, with multiple sentences being the norm. I would have preferred a simple phrase like “Add 1 to a die roll”, “Cancel a models interrupt without burning its activation”, “Subtract 2 from an opponents die roll”, “The activate shooter runs out of ammo after taking his next shot.” In addition, there are some cards that are much too powerful such as the card that allows the police to re-roll any shots that miss for the rest of the turn.

The Chicago Way is a good game, but it still has some of the deficiencies that Dead Man’s Hand has. There is the initiative that I mentioned earlier and some overpowered cards. In addition to that, hard cover is practically useless in this game. All it gives is a -1 modifier to whoever is shooting at you. It’s best not to bother putting your characters in cover and instead concentrate on positioning them in such a way that you get several of your characters attacking a single enemy character. Even though The Chicago Way uses miniatures it really is a card game in disguise. The cards in your hand and how you play them determine your fate more than your proficiency with traditional skirmish tactics. Gamers who like Malifaux will love this game, but gamers who want a traditional skirmish miniatures game may believe the game would have been better off having more substantial bonuses for hard cover and no cards whatsoever.

Buy The Chicago Way Rules, miniatures or terrain on eBay.