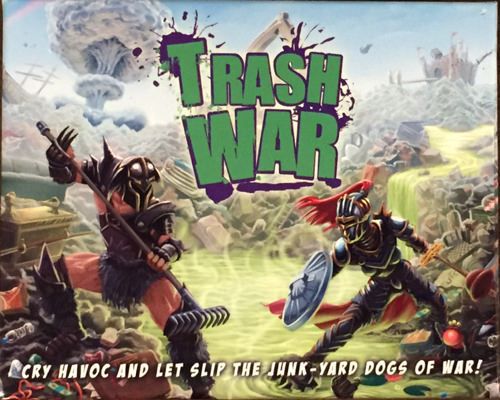 Trash war is an interesting card game for 2-5 players where you are a knight trying to knock down all three of your opponent’s walls by throwing trash at them. Watch out though, because your opponent can swing a mace at it and bat it at another player’s walls. The last knight with a wall still standing wins the game. This is a fast play game for ages 10 and up and most games resolve in less than 20 minutes.

The cards for Trash War are all good quality with nice artwork and fit nicely in the well-fitting game box. There are 15 wall cards and 97 “action” cards. The “action” cards are trash, maces, shields, catapults, deflects and burn trash cards. Some of the trash cards that you throw at enemy walls are hilarious such as x-ray machines, smelly pants and commodes. The trash cards state how much damage they do on the top right corner.

To begin the game, each player puts 3 walls in front of him and the deck is shuffled. Next, each player draws 5 cards and issues a battlefield threat against their opponents. The player with the most blistering threat goes first. However, in a 2-player game each player may think their threat was the best. In those cases, I feel it’s best to choose the first player with a die roll or coin toss instead.

Player 1 begins the game by flinging a piece of trash at an enemy’s wall. After that, the normal sequence of play begins and it is:

1) Defense: if the defender has a mace, deflect or shield card you may use it now. Shields will stop damage from trash of certain damage values. Deflect doesn’t stop damage, but allows you to choose which of your walls get hit. Maces allow you to bat the damage away and you choose which of the player’s walls it hit. If you use mace, you then jump to phase 4. At the end of this phase, if there is a total of 4-trash damage on one of your walls it is destroyed.
2) Burn or repair: If you have a burn trash card, you can use it now but burnt trash goes in a special discard pile and never gets reshuffled into the deck. The repair card can be used now to repair a destroyed wall.
3) Launch Counter-Attack: You may attack any opponent you wish with one of your trash cards
4) Redraw: Draw back up to 5 cards in your hand

What I really like about this game is that the next player to play is whoever just got attacked. You never know when your next turn is and I like the uncertainty it adds to the game. In addition, I like the catapult card. It allows you to throw 3 trash cards at once, which often is enough to destroy a wall in one shot. The downside is the defender to can use the mace to bat ALL of it at another player.

There is sufficient strategy involved in Trash Wars to make it fun and give it plenty of re-playability. You never know if the trash you threw is going to be batted right back at you and it’s a good strategy to have a mace in your hand before using a catapult. In 3 or more player games, players can make alliances and try to take out one player or just try and play it cool and evenly distribute their attacks among their opponents. In addition, there are lots of “revenge” attacks, which I love. It reminds me a bit of playing a free for all Magic the Gathering game with 3 or more players.

I recommend Trash War for anyone looking for an inexpensive, fast playing, fun game with plenty of re-playability.

Buy your own copy on Amazon here.