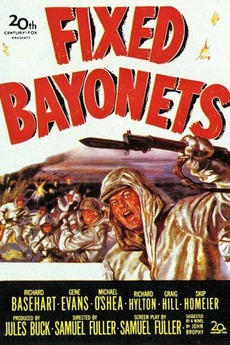 Fixed Bayonets may be one of the best war film ever made. This film was made by people who had seen war and wanted to portray it as accurately as possible in glorious black and white.

Samuel Fuller is a noted movie director. He is famous for Noir films and is a master of black and white photography. His colored films never seem right. Fuller served in the First Infantry division during most of WWII. This was detailed in his later movie, The Big Red One. Gene Evans, who played Sergeant Rock, was a combat engineer who was awarded a Purple Heart and Bronze Star. The military advisor was not some REMF. He was Raymond Harvey and was awarded a Congressional Medal of Honor for bravery in the Korean War. Harvey would work with Fuller on other movies.

This movie takes place in the opening months of the Korean War. The first Chinese offensive has started and is threatening to surround American forces. The movie opens with a jeep hitting a mine. Two GIs have seen this and they note that it is the general’s jeep. They expressed their admiration for his courage and also note the danger; the enemy is too close.

In the next scene, the divisional general is being patched up in his command tent. He is discussing with his staff about the decision to retreat. This is the first of many times in this film where there is a group scene. The group is crowded together and there is other movement in the background. The general and the staff discuss how they are going to retreat. One narrow pass has to be guarded for a few days to prevent the enemy from surrounding the division. One platoon has to stay behind in the mountain pass to be the rear guard. They have to hold the pass for a few days and bluff the enemy into thinking they were more powerful than they were.

Rear guard missions are difficult. You have to hold the position for a short time and then retreat. The enemy outnumbers you and you never know how many are out there. Successful rear guards are memorial, because most fail.

The next scene is a classic. The rear guard platoon stands by the roadside as the rest of the division marches past. They are crowded together and you have never seen a sadder group. The song “Back Home in Indiana” is softly playing in the background. It is a song about longing for your home and fits the mood of the movie perfectly.

The pass is very narrow and they block it by chopping down a tree, laying out barbed wire and laying mines. They also find a cave where they will shelter when on watch. Everybody is close together talking and moving. For a war movie, there is a lot of talking. At the same time, there does not seem a wasted word. The conversations either explain what has happened or set up the next scene.

Next, starts the subplot that drives the rest of the movie. We meet Cpl. Danno (Richard Basehart.) He has an enemy soldier in his sights, but cannot pull the trigger. Another GI shoots instead. He advises Cpl. Danno to think of them as an enemy not a human being.

Danno must be new to the unit. Sergeant Rock (Gene Evans) asks about his background. Danno confides to Rock that he made a mistake in Officer Candidate School that resulted in soldiers under his command suffering serious injuries. He sums it up by saying that “I can take orders, but not give orders.” Rock reminds him that only three men outrank him, and three bullets can put him in command. You know that is what is going to happen.

In the scene called “Physiological warfare” we meet the Chinese. They look as cold, tired and as ragged as the American GIs. The Chinese surround the American position and play bugles. This is supposed to frighten the GIs and some are. One soldier has heard their assembly call so many times, he has written a song about it. One GI goes out to get a bugle and gets it. The look on the face of the Chinese when they hear that one bugle is missing is hilarious.

Danno shows his courage by going through a mine field to save another GI. The only GI who has a map is naturally the GI on the other side and he has just collapsed.

As expected, the leaders are picked off and Danno is in charge. The Chinese are attacking. The attack is one scout and one tank. Danno deploys his troops and they are not to fire until he does. He has the scout in his sights. We wait tensely until Danno shoots the scout dead on. The rest of the GIs open fire with their machine guns, bazookas and recoilless rifles and the tank is blown up.

The men want to withdraw now, but Danno reminds them that their orders are to stay until tomorrow morning.

In the last scene the men are wading across a river. Danno is the last one and he is carrying a wounded man. He now looks confident, which is the look we remember from when he played Admiral Nelson on Voyage to the Bottom of the Sea.

It was only until after the movie finished that I noticed that there was no breath condensation.

The attack at the end is how the GIs see war. War to them is themselves with a few buddies against the two or three enemies that they see in front of them.

I do believe that the comic books did get the idea of Sergeant Rock from this movie. Both the Gene Evans version, like the comic book version are sergeants you would want to serve under.

To sum it up, This is a war movie you must see.

Face to Face at Antietam Preview

Face to Face at Antietam Preview by David Lent

Skirmish Scale by Len Krol We have always been told that there are three scales in war gaming. They are tactical, operational, and strategic. Actually there see...[Read More]

Captain Dave must defend planet X from the evil alien attack. This game plays like an old-school 2-D arcade shooter. Your browser does not support the HTML 5 Ca...[Read More]

In 1980 Avalon Hill sold an Index and Company History covering 1952-1980. This publication contained information on every game they produced during that period ...[Read More]

Mongol Logistics by Len Krol There is a conspiracy website that oddly asks a lot of good questions. While they have the usual nonsense, there are other areas wh...[Read More]