Struggle for the Galactic Empire Review

Struggle for the Galactic Empire (SFGE) is a solitaire board game about running an empire that spans the entire Milky Way galaxy. As emperor, you are constantly trying to deal with threats from rebels, usurpers, invaders and aliens. Joseph Miranda designed SFGE and I liked his other solitaire games such as Khe Sanh’68, Suez ’56, Zulus on the Ramparts, Border War and Congo Merc so I thought this game would be perfect for me. I was wrong. The other games I mentioned were geared toward being a lot of fun while being lower in complexity, but still maintaining a historical flavor. SFGE is complex, tedious and did not hold my interest. Decision Games has a video game version of this and though I haven’t tried it, I suspect having the computer do the book keeping and finding the random locations would reduce the tedium and make it more fun.

SFGE includes very basic components. There is a rulebook, one D10 dice, 3 pages of charts, 2 sheets of counters, a chaos event marker explanation sheet, and a map. I felt that the components were less than what I would have wanted for a $60.00 game. For this price, I would have expected a mounted map and counter tray.

The rulebook is 32 pages long with two pages of fluff and the rest being rules, charts, etc. The game box claims the game is of “medium” complexity, but I found the complexity to be “high” instead. I like to read rulebooks a few hours before going to bed. This one nearly caused me to fall asleep while reading it. During game play, the rulebook needs to be consulted a lot and some of the information in it was hard to find. I felt that the rulebook could have been organized better. The last thing I want to mention is that two of the charts/tables are on the back of the rulebook. Why couldn’t they be on the chart sheets with the rest of the charts? There certainly was room, since one of the chart sheets is blank on one side.

In SFGE, you have to constantly roll two dice on the sector randomization table to find a random sector. I was very disappointed that this game only included one D10 dice. A second D10 of another color costs very little and should have been included.

The 3 pages of charts included in SFGE were ok. My only complaint is that there are too many charts and tables. I spent more time looking for the correct chart than playing the game. 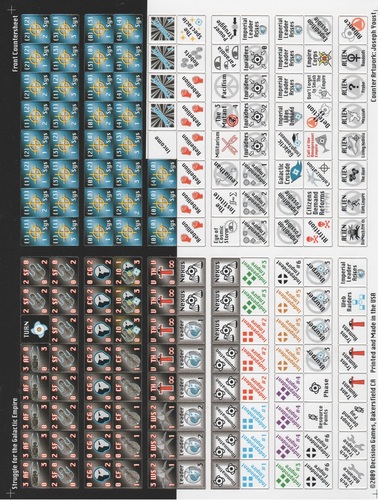 SFGE include two sheets of identical counters. These counters are difficult to punch out, but the artwork on them is ok. They represent star ships, solar systems, chaos events, etc. I wish that cards were used for chaos events instead of chits. When you draw a chaos event chit, you have to look up what it does on the chaos event marker explanation sheet. This probably doesn’t sound like a big deal, but it is because your first turn alone you have to draw 24 chaos event markers and look all 24 of them up. It would have been much easier if there were cards with an explanation of the event on it.

The map is really big and is essentially a big poster of our galaxy. It has a few charts, chaos/resource index, turn track and sequence of play printed on it, but I wish it had more charts. The turn track and sequence of play took up too much room on the map. Reducing their size would have made more room for additional charts. SFGE requires a big table to hold the large map, cups of counters, rulebook and charts. I had to add extra leaves to my game table to accommodate everything. Normally, I don’t have to do that unless I am using the table for a miniatures game.

Most scenarios for SFGE last 10 turns. Each turn has 14 phases. The first turn I ever played in this game took 2 hours! Sure, a lot of that was because I was learning the rules, but subsequent turns took about a ½ hour each. My first game took 6 hours (not including punching out counters and setup time)!

Normally, I like to give a summary of the rules in my reviews, but this isn’t practical when reviewing a game with a 32-page rulebook. Instead, I’ll attempt to describe what happens in a typical turn.

The first thing that happens in a turn is you pick a number of chaos event chits determined by your chaos level with a chart. You immediately resolve these. Very few of them are beneficial. Most either cause, rebellions, usurpers, invasions or a change in the chaos level.

Enemy forces are moved around the board according to a chaos operation chart. If they make it to a sector with friendly forces, they attack if that is what the chart said for them to do. Combat consists of both military & morphogenic combat. Morphogenic combat is propaganda, mind control, etc. It’s used to take control of an enemy ship or system. It is preferable in this game to take control of enemy ships than to destroy them, because they add to your military force.

If Usurpers happen to destroy all your forces in the galactic core sector, you are in serious trouble. You have to roll on the usurpation table to see if they take over your government. It isn’t the end if your government is overthrown though. You continue the game using the new government and roll some dice to add to the chaos index.

Next, you count how many system points you have and collect resource points. If this isn’t tedious enough, you now count each type of ship you have and pay maintenance costs. You may now use any remaining resource points to purchase ships or nexus points. A nexus allows you to have a die roll modifier in extropy operations or may be used to suppress your units from joining chaos.

You may now colonize new systems with any colony or world ships you have on the map. These ships are expensive and move slowly, so it is usually preferable to use morphogenic combat to turn an enemy system to your side rather than destroy it and have to colonize it later.

After colonization, imperial movement and combat occur. There is plenty of combat in this game, because you are constantly being invaded and many of your forces will rebel or try to usurp you.

Extropy occurs next. Extropy is where you try to lower the chaos index so you have less chaos events occurring for the rest of the game. You pay one resource point per system and roll on the extropy table. Sometimes you will increase chaos, sometimes you will lower it and sometimes one of your leaders will die in the process. Nexus markers and illumination markers give you a die roll modifier to make it more likely that chaos will be lowered. The chaos index value is also used at the end of the game to determine your level of victory or defeat.

Near the end of the turn, you resolve any alien event chits on the board. Aliens are just a headache in this game. You roll for them every turn and they either destroy all imperial and chaos forces in their sector, do nothing or they are eliminated. There is one alien called the Messiah who prevents combat in his sector and each turn that protection is extended one sector on all sides. This continues to happen until he is eliminated. I would have liked to see at least one alien that was beneficial, such as one that gives the Empire advanced technology or something.

Why didn’t I like this game as much as Joseph Miranda’s other solitaire games? Believe it or not, it wasn’t because of the high complexity. I prefer low to medium complexity games, but there are some high complexity games I like. It was the tedium of the game itself. There are too many chaos events to resolve each turn and resolving them is a pain. Just finding the random sector determined by the sector randomization table is time consuming due to the unorthodox layout of the map. If the chaos chit said the sector must contain an imperial unit and it doesn’t, you have to continue to search for a sector that does. To make matters worse, once per turn you have to count all your system points so you know how many resource points you get. After that, you have to count all ships of each type on look them up on the imperial expenditure chart to get the maintenance costs. I am not a fan of book keeping in games or tedious processes, so this game isn’t for me.